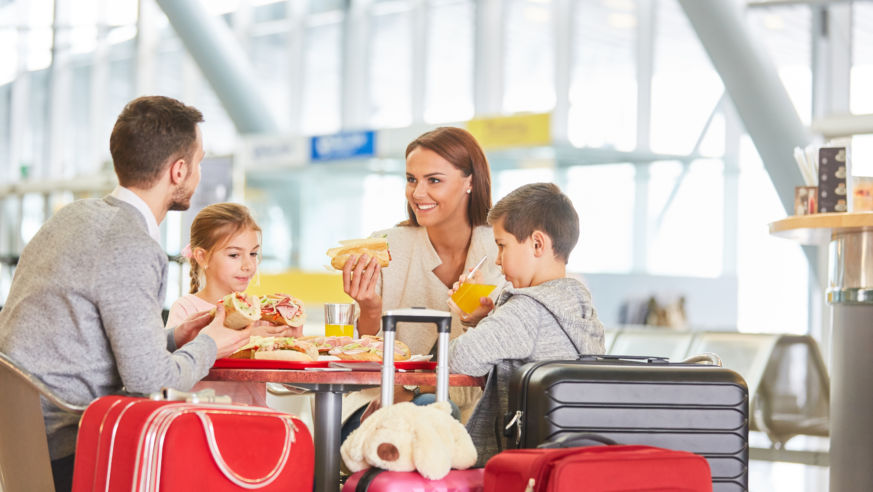 Airports often have tastes of a city’s best restaurants, specialty dishes, and local food. Here are some of the best places to eat during a layover.

Local food isn’t just a culinary trend in hipster hubs. It’s catching on in airports, too. That’s good news for travelers. You can forgo that chain fast food order for tastes of a city’s best restaurants, specialty dishes, and local food during a layover. Here are some of the best places to have a unique dining experience before catching your connection.

Some of the Valley of the Sun’s favorite restaurants have landed at Phoenix Sky Harbor. Top brunch joint Matt’s Big Breakfast (try the waffles with sweet cream butter) has a legendary status in town, as does Iron Chef winner Mark Tarbell, the founder of airport restaurant The Tavern. To appease a sweet tooth, head to Tammie Coe Cakes, for cupcakes or big cookies, or Sweet Republic, for handcrafted ice cream in flavors such as salted butter caramel swirl. If you only have time for a quick craft beer, SanTan Brewing Company and Four Peaks Brewery have local suds on tap.

Austin is a downhome food town, and its airport is no different. Tap into the town’s food truck vibe with a burger from Hut’s Hamburgers or a bahn-mi taco from The Peached Tortilla. Salt Lick Barbecue is a Hill Country-import with barbecue-sauce slathered smoked meats, sandwiches, and baked potatoes. Plus, you can grab some packaged brisket to take home with you. Austin institution Amy’s Ice Creams also scoops artisan ice cream in flavors like Mexican vanilla.

Travelers can follow a Texas barbecue trail without even leaving the airport. Hop from Fort Worth classic Cousin’s BBQ or Cousin’s Back Porch, to Dickey’s Barbecue Pit (the chain is based in Dallas), and The Salt Lick. Then diners can balance all that Tex with a fair share of Mex at restaurants such as Pappasito’s Cantina.

This airport is a Hollywood gateway, so it’s no surprise the airport’s home to a few star chefs’ restaurants. For example, Top Chef winner Michael Voltaggio is the mastermind behind ink.sack, a gourmet sandwich shop. At Homeboy Bakery, diners eat local and give back to Los Angeles. The bakery is a social enterprise of Homeboy Industries, which serves formerly gang-involved men and women, and, at the bakery, trains them with job skills. Travelers can also get a local-food fix at the Original Farmers Market. After 80 years, the LA institution opened an airport locale to serve meals, snacks, and sweets straight from the market’s restaurants and stalls.

Manhattan is a playground for internationally known chefs – and many have opened airport restaurants. New York City local Andrew Carmellini opened sandwich-centric Croque Madame. Top Chef Masters’ champion and James Beard Foundation award-winning chef Marcus Samuelsson founded Uptown Brasserie, serving international cuisine in a brasserie environment. Shake Shack may be a national chain now, but it started in New York City, so travelers can get their burger hit and feel like they’re eating local all in one bite.

Hartsfield-Jackson Atlanta is the busiest international airport in the world, so travelers are likely to make their way through here at some point – or often. In Atlanta, eating at Chick-fil-A counts as eating local – the chain was founded in there – but there’s much more than chicken sandwiches and waffle fries. The first upscale restaurant at the airport, One Flew South serves global fare, while Paschal’s, a more than sixty-year-old spot, doubles down on soul food.

Tourists can get in on the late-night-recording-session vibe with Nashville-born 8th & Roast Coffee Co. Burritos may not be the first thing that comes to mind when thinking of Tennessee, but Blue Coast Burrito has spread its tortilla wings across the state and has an airport setup. Music City isn’t short on beer, either. Grab a craft draft at Yazoo Brewery kiosk, Tennessee Brew Works, and Fat Bottom Brewing. Swett’s serves a classic Southern lunch—don’t miss the pecan pie.

San Franciscans were going green and serving local before it was popular, and its airport restaurants reflect that tradition. Burger Joint has been plating humanely and sustainably raised meats on family farms and ranches since 1994, and it continues to do now inside the airport. The Plant Café also serves local, organic food, and sustainable seafood. On the run? Duck into Napa Farms Market, a marketplace that reflects northern California’s agricultural bounty with grab-and-go sandwiches and baked goods.

What’s the Perfect Father’s Day Gift for a Travel-Loving Dad?